I’ve been reviewing OnePlus phones since the third model, released in June of 2016, and there’s been a common theme in all my reviews through the years: the phone is fast. The fastest, in fact. Other devices aren’t slow per se, but use a OnePlus phone for a couple of days and jump back to an iPhone or Samsung Galaxy and you’ll notice that apps take just a beat longer to pop open after a thumb tap, and then require another extra split second to load.

But you can only crank up speed so far before it becomes unnecessary. App launch speed had already become virtually instantaneous on last year’s OnePlus 6. Any faster and human reflexes wouldn’t even be able to keep up. And so with this year’s OnePlus 7 Pro, the company looked beyond just being fast — but also smooth.

And the company’s done it. The OnePlus 7 Pro’s screen is the best in the industry by reviewer consensus. The new trick this year is a higher refresh rate of 90Hz, meaning the phone’s screen refreshes itself 90 times per second. Most displays in the real world right now refresh at a 60Hz rate; meaning animations on the OnePlus 7 Pro’s screen move 50% faster.

But as I said earlier, there’s no sense in pushing animations even faster as our reaction times can’t keep up anyway. So instead OnePlus has used that higher refresh count to add extra animations to the UI, resulting in motion that appears more fluid to the human eye. This is immediately noticeable in basic phone usage scenarios: swipe out of an app back home, and the app glides off the screen alongside our finger movements, falling back into its original homescreen location in an animation that’s smooth and fluid. Use the OnePlus 7 Pro for a day and go back to another Android and animations appear slightly choppier and jerkier; not unbearably slow, but it’s noticeable.

Gamers or phone enthusiasts are aware that the 7 Pro doesn’t have the highest refresh rate in a phone right now — Razer's gaming phone has a display that can refresh at 120Hz (and yes, I raved about the fluidity of that screen’s animation too). But that screen only selectively bumps refresh rate up to that peak, and features an LCD screen. The OnePlus 7 Pro’s screen is at 90Hz almost constantly, and its OLED technology is superior.

Add in the fact that the 7 Pro’s Quad HD (3120 X 1440) screen is virtually completely bezel-less and the OnePlus 7 Pro’s screen is the best in the industry right now.

The rest of the hardware: mostly good, with some nitpicks

Considering the high bar the screen has set, it would not be a shock to say the rest of the phone’s hardware doesn’t quite live up to those lofty standards. Sure, the Snapdragon 855 chipset and up to 12GB of RAM are much welcomed, but the phone’s back is a bit generic in my opinion. The rear camera module sticks out a bit, which was something I didn’t mind in 2017, but recently the Oppo Reno and LG G8 have introduced completely flush camera modules that reside underneath the glass panel. I’m also not a fan of OnePlus placing its branding twice on the back: there’s the company logo in the middle just below the camera module and the word “OnePlus” near the bottom.

The triple-camera system also isn’t particularly exciting. The main lens is a 48-megapixel Sony sensor, which has been used by at least eight or nine phones in the past three months. The 8-megapixel telephoto lens offers 3X near lossless-zoom, which is fine, but I’ve been spoiled by the new “Periscope” type lens (seen in the Huawei P30 Pro and Oppo Reno 10X) that can achieve 10X near-lossless zoom. There’s a 16-megapixel wide-angle camera here which gets the job done during the day, but it cannot shoot videos, something that LG, Samsung and Huawei phones can all do.

To be clear: the cameras here aren’t bad at all — I’ll dive deeper into camera performance later in this review — it’s just not game-changing in the way Huawei’s and Oppo’s recent cameras have.

The 6.6-inch OLED screen is bright and HDR 10+ certified, meaning select content from Netflix and other media platforms look more vibrant. Like the Oppo Reno, OnePlus has managed to cram a loudspeaker into a tiny sliver above the screen, so this phone has stereo speakers that sound great. The 16-megapixel selfie camera is, as widely publicized by now, housed inside the phone, elevating into view when need. The elevation and retraction is fast, and if the phone’s gyroscope detects it is in freefall — during a drop — the selfie camera will retract automatically to avoid damage. I’ve tested it; it works.

There’s a 4,000 mAh battery inside the device, but would be more than enough for a normal phone, but the 7 Pro’s hi-res, ultra fluid screen demands more juice. Battery life isn't bad, like on the iPhone X or LG V40 (those phones would last me barely past dinner time), but the 7 Pro can’t ease my battery anxiety like Huawei phones can. However, when you do need to charge the phone, it can top up really, really fast. OnePlus uses the same charging technology as Oppo, and it’s the fastest in the industry. A 20 minute top-up will add 40% to your battery.

Software: still the best in the business

While OnePlus’ camera hardware lags the Huawei’s and Oppo’s by a bit, in terms of software OnePlus is miles ahead. OnePlus’ OxygenOS is the best Android skin on the market, and many reviewers share my view that it’s even superior to Google’s own plain Android.

So, why is OxygenOS so good? It’s the fastest and most customizable software experience around. The new “dark mode” feature coming to the next edition of Android and iOS that prompted plenty of applause during Google’s and Apple’s respective events? OnePlus has offered that since at least 2015. The phone comes with virtually no bloatware. The in-display fingerprint reader is the fastest around, something even the third party vendor admits is due to OnePlus’ software optimization. The list goes on.

Bafflingly, OnePlus has never offered a one-hand mode — in which the screen shrinks to a smaller size via a gesture — and that’s becoming problematic here because the 7 Pro is one of the largest phone on the market. I can still make do, but I’m hoping OnePlus will address this with the next release.

Cameras: gets the fundamentals right, but falls short in specialty shots

As I mentioned earlier, the 7 Pro’s cameras are mostly fine and will produce some very nice shots that can hold their own against Apple’s and Samsung’s best offerings, the iPhone XS and Samsung Galaxy S10. 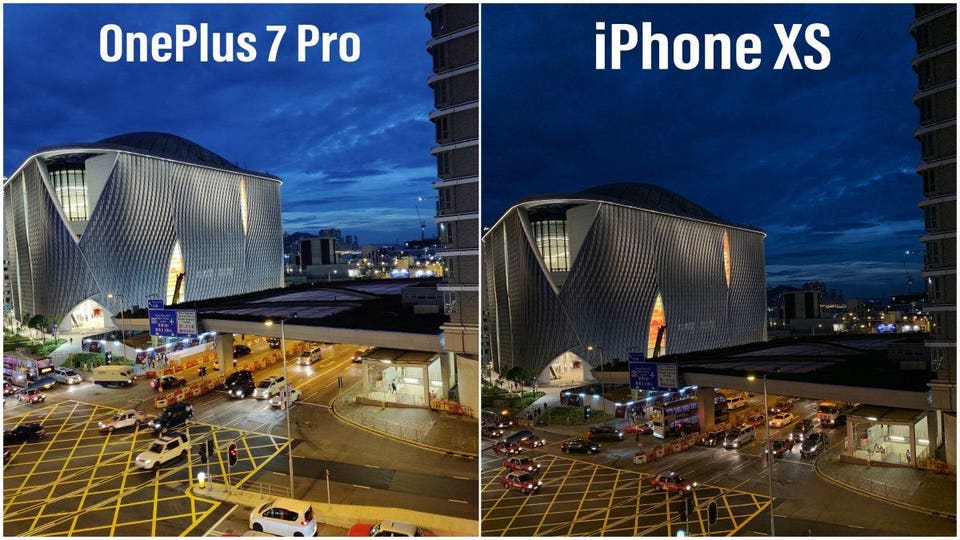 General photos taken in daylight will result in pleasing images. The 7 Pro’s shutter speed is fast (during the day), the camera app is easy to use even with one-hand, and OnePlus’ color science is pleasing to my eyes, neither too oversaturated like Samsung’s or too over-processed and “cold” like Huawei’s. 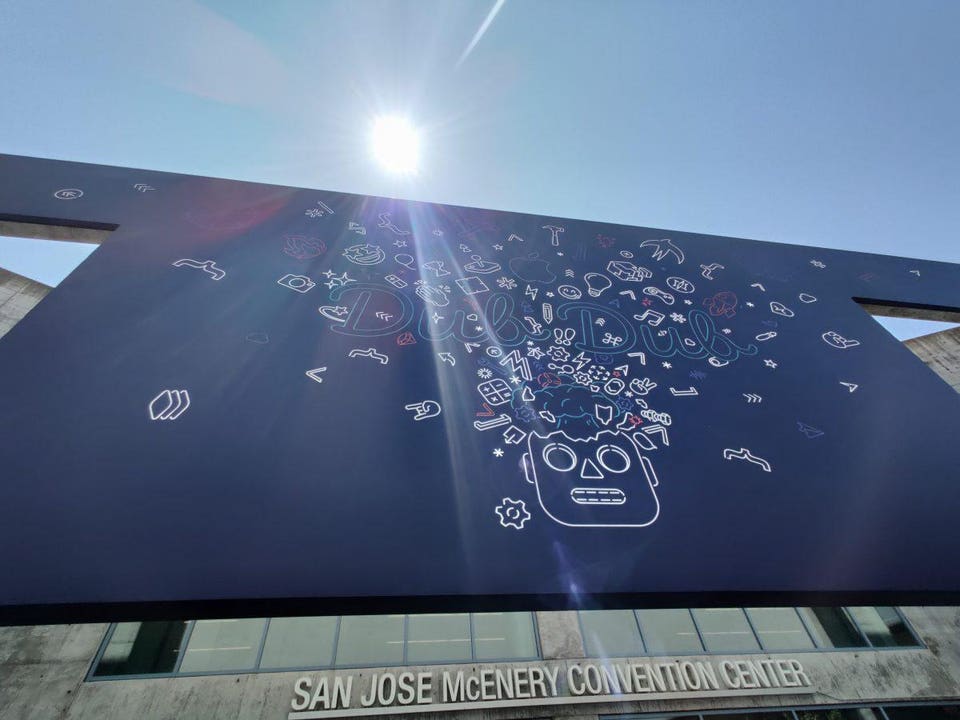 The wide-angle camera does an admirable job of reducing barrel distortion and is always useful for grabbing shots a normal lens simply cannot. Portrait/bokeh shots and video recording are also on point — edge detection is great for the former and video is stable and smooth all the way up to 4K/30fps.

But if I nitpick, I can easily point out areas in which the 7 Pro’s cameras fall short of the competition. The wide-angle camera’s inability to capture videos leaves me very disappointed. Shooting at night produces solid images, but they fall short of what the Google Pixel 3 or Huawei P30 Pro can do. And the 7 Pro’s night mode, named Nightscape, is bafflingly inconsistent.

Other times, like the below image taken inside the venue of Apple’s Worldwide Developer Conference, it’ll produce an image that looks slightly worse.

And the telephoto lens’ 3X zoom feels underwhelming after having used the Oppo Reno’s epic zooming capabilities. To OnePlus’ credit, the zoom lens can double as a useful macro lens, capturing impressive close-ups like these.

Considering that Oppo and OnePlus have close ties, I really wished OnePlus had found a way to implement Oppo’s Periscope zoom lens on this phone. I have a feeling OnePlus will do just that with the next release.

The OnePlus 7 Pro starts at $660 in the U.S. and roughly that same amount in many parts of the world. In China, it’s cheaper, starting at 3999 yuan ($578). Expectedly, there’s been a divide in reception to OnePlus’ pricing. In the U.S., in which the market is increasingly becoming a duopoly of Apple and Samsung, the 7 Pro’s $660 price is considered a great value. In Southeast Asia, particularly India, however, there has been backlash at OnePlus for that price tag.

However, if you simply don’t care about the 90Hz screen, then there are many other cheaper options, the best of which are from OnePlus’ sister companies. The Realme X, for example, has the same 48-megapixel Sony sensor as OnePlus, the same all-screen design, and same in-display scanner, and that phone starts at $270. And on the other end is the Oppo Reno 10X, which is a bit more expensive than the 7 Pro but has a significantly superior telephoto lens that can capture stunning zoom shots.